I recently read Natalie Moore’s The South Side and found some striking similarities in our upbringing and experiences.  I grew up in Chicago in between St. Leo High School and St. Sabina in Auburn-Gresham: a virtually all-black neighborhood on the South side of Chicago – about three miles west of where Natalie Moore lived in Chatham.  We actually grew up in the same era – the late eighties and nineties.  My parents moved to Auburn Gresham after having lived on the West side of Chicago in the 1950s. They migrated from a small town in Arkansas called Cotton Plant (named after its lucrative cash crop). They were one of the more than 5 million African-Americans who moved from the South to northern cities between the 1940s and 1960s.  Like most Black families that moved North, they sought good jobs, an improved education for their children and an overall better quality-of-life.  For many southern-born African-Americans of their time; the North was a symbol of freedom, hope and escape from Jim Crow oppression.  It was also a means to add a new chapter to a narrative that had been tied to the land.

Upon arriving in Auburn Gresham, they experienced a neighborhood similar to the Chatham neighborhood of Natalie’s parents.  Auburn Gresham was a pedestrian-friendly neighborhood with restaurants, tailors, pharmacies and specialty shops of all kinds in the company of longtime white residents.  Like Chatham, they enjoyed this biracial utopia for a short while however as it was not long before the demographics of Auburn Gresham changed.  Whites filled with fear and dread, wanted no part in having my family and other blacks as neighbors and responded by escaping to suburbs or unmixed parts of the city as if fleeing a plague. The white residents my parents knew were replaced by tradesmen who would only enter the community for commerce.  Former mayor Harold Washington captures this phenomenon descibing his experience growing up in the “black belt” of Chicago in the 1920s and 30s: “My relationship with whites was spasmodic, involving contact with the grocery man, the butcher, the streetcar conductor, the bus driver…The South Side was my world.  I would get on my bicycle and ride all over the entire South Side and not come in contact with a single white person[i].”

The shops my parents knew that lined the main street quickly disappeared (and were later replaced by inferior mini-mart style corner convenience stores); as their proprietors relocated to enclaves further south and west of the city.  Housing historian and founding director of The U.S. Department of Housing and Urban Development (HUD), Robert Weaver, describes the community transformation that my parents witnessed in his book The Negro Ghetto.

Churches, community centers and other facilities were soon surrounded by a new racial group. Schools underwent a transformation in the color composition of their pupils; merchants found clients made up of a new racial and often lower economic group. All of this was a shock. It was sudden, too.[ii]

The response to the shock of the African-American entrance into urban communities created a “city-within-a-city”: a place where black families were spatially isolated as white families took shelter farther away from black settlements.  This redistribution of space did not happen by accident, but through a number of actions and policies that fostered its creation.  As sociologists Douglas Massey and Nancy Denton describe in their book American Apartheid, “The black ghetto was constructed through a series of well-defined institutional practices, private behaviors, and public policies by which whites sought to contain growing urban black populations[iii].”  Some of the more intentional methods of creating spatial isolation included: 1.) racially restrictive covenants that limited the areas where African-Americans could live, 2.) “Red-Lining” that denied financial and other services to move into affluent areas and 3.) exclusionary zoning that limited land uses.  Another force that led to the creation of the black ghetto was Chicago Mayor Richard J. Daley.  Daley’s heavy-handed political tactics and will played a large part in keeping blacks isolated in slums and later public housing high-rises.  Segregation was to his advantage as it concentrated Black democratic voting power in the wards he controlled and assuaged white voters by protecting Black encroachment into White neighborhoods.  As laws prohibiting the most blatant forms of housing discrimination were enacted, Whites began to flee as Blacks advanced.  Neighborhoods like Chatham and Auburn Gresham opened up to Black families like Natalie Moore’s and mine.

During the time Natalie and I grew up, Auburn-Gresham had a strong base of working Black families.  Like her reflections on an earlier Chatham, Auburn Gresham wasn’t a nirvana that should be embossed in mythic Black nostalgia but it had many good anchors.  My father was a bus driver for the Chicago Transit Authority (CTA) for over thirty years which was a steady respectable vocation.  My mother loved and raised me and my two siblings in a home full of joy.  Every day was like a family reunion.  We lived on a unique block that had my grandmother living in a two-flat building across the street and the two homes just north of hers belonged to my aunts.  My family lived in a two-flat also with my aunt and favorite uncle Bert living upstairs.  What wonder I experienced by just walking upstairs.  Uncle Bert would often have the living room set up like The Bozo Show when I went up and we’d play the legendary clown’s ball toss game with decorative miniature trash cans that he lined across the floor.  He also taught me how to make a flute from a hollowed out stick and how to shine shoes.

After school I ran around the block playing “It” with a mix of cousins and other kids on the block before going inside to watch Rap City or Yo! MTV Raps when we got older.  When Natalie Moore was watching Episode I of The Cosby Show I was blocks away being excitedly hurried into the house from outside to witness Dr. Heathcliff Huxtable usher in an unprecedented display of aspirational blackness on television.  On weekends, I got my hair cut by Mr. Gunn or his son at the barber shop around the corner on 79th and May and ate hoagies at Taurus Flavors or ribs tips with barbecue sauce-soaked french fries from Perry’s Ribs.  One of my favorite neighborhood memories was going to the corner store and playing the arcade version of Kung Fu Master – the store’s lone arcade game – amid people buying FUNYUNS, Lemonhead candy, milk, and lottery “quick picks”.  Crowds clamored huddled in the chilly store with the door constantly opening letting in the Chicago “hawk”.  There I was standing in front of the arcade machine on a cardboard carpet designed to absorb melted snow from boots.  I could feel the number of warm bodies around me grow as neighbors gathered to marvel at how long I could fight with one quarter – a major source of adolescent neighborhood props.  Hip Hop music and culture was a recurring element in my life back then and remains so today.  When the “Beat Street” and “Breakin’” movies came out, I dragged my own card board into the middle of Aberdeen Street to show off my back spin skills when cars weren’t coming by.  When not breakin’, I might be on the porch blasting the latest X-Clan cassette tape, “Grand Verbalizer What Time Is It?”.

My elementary school – St. Sabina Academy – was all-black and a four block walk from my house.  Having a walkable nearby school is an amenity but my father nonetheless picked me up as kids could still be approached by Gangster Disciples even in that short distance.  I had a great time in school.  We traded homework notes, passed out Now and Later candy to each other and freestyle rapped over break beats that were beat out with our knuckles on the desks.  A main event included challenging each other in pre-cell phone games like “pencil popping” – a game where a person would firmly hold their pencil horizontally between their hands while the other person used their pencil to try to break it.  The power was all in leverage and the flick of the wrist.  Gregory Lee had so much that the bones in my hands would vibrate and resonate with that weird “funny bone” feeling when he made impact.  Except for TV, we didn’t encounter many white people.  My friend Vino was so curious about our white teacher, Ms. Hickey, that he quietly put gum in her long hair when walking behind her desk.

I received a scholarship to The Francis W. Parker School in the Lincoln Park neighborhood of Chicago.  Like Natalie, having gone to a diverse school (with me and a few others being the diversity) was great for me.  The school provided a good education but little did I know, my observations along the CTA bus and train route back-and-forth each day would be more telling. 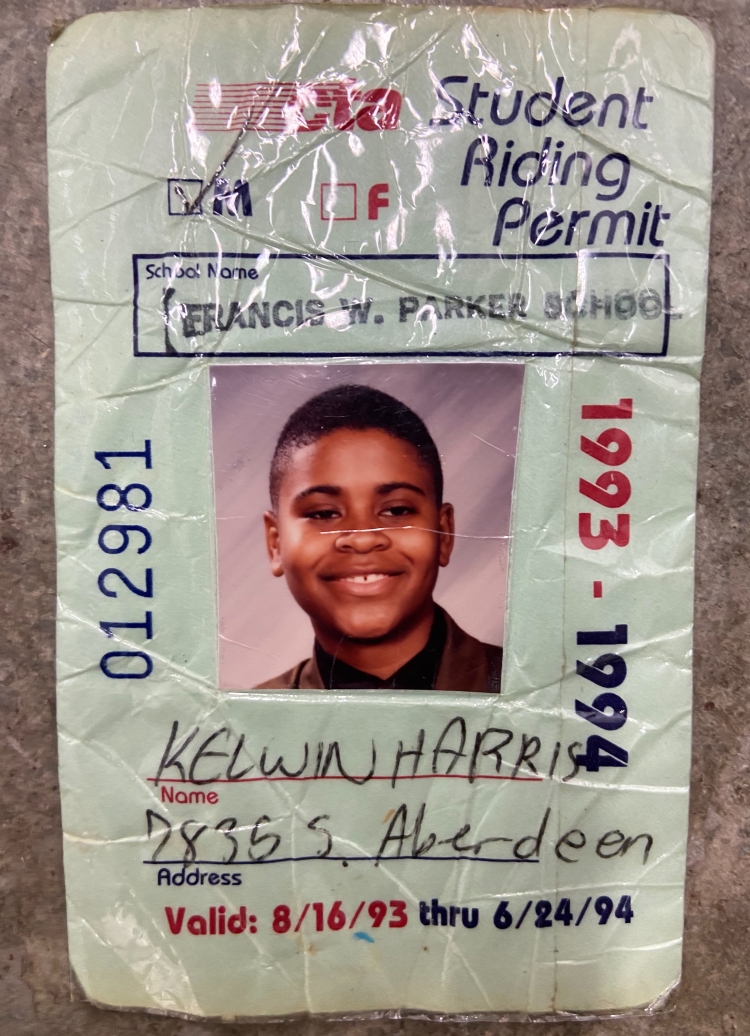 I had an epiphany as I travelled through many different communities of varying economic and social realities.  As I looked out of the window along the way – to a personal soundtrack of DJ Premier and Illmatic beats blasting through my headphones – I saw places and neighborhoods that looked more vibrant and prosperous than my own.  I was forced to wonder why some communities succeeded while others failed.  This became the basis for me becoming an urban planner.

Auburn Gresham has changed a lot.  It underwent an infrastructure renaissance in the mid-nineties when Mayor Richard M. Daley invested roughly a million dollars to help stimulate growth along 79th Street that included new sidewalks, benches, ornate light poles, signage, senior housing and a pocket park.  Even with these improvements however, the neighborhood economically and socially has gotten more depressed and has a serious gun problem.  Although, not wholly to blame, its already tenuous state has been exacerbated by an influx of CHA Housing Choice Voucher relocatees, who came after the notorious public housing high-rises were torn down.

I don’t live cemented in urban nostalgia of past golden years but like old school Hip Hop music, there is something more special about that earlier time.  Sometimes as if my mind’s playing tricks on me, I still see old faces that take me back to growing up in Auburn Gresham.  One person I bumped into after decades began talking to me about Scarface from the nineties Houston rap group “Geto Boys” as if to pick up on the last conversation we probably had back then.   There’s a lot to be cherished about neighborhoods like Natalie’s and mine that were more stable in times past but the discussion shouldn’t stop there.  Economic development activity must be promoted, while crime and alternative jobs and job training must continue to be secured.  I believe there’s a positive future for Auburn Gresham and although it won’t ever again be the way I remember it: I still enjoy the sparkle of the memories of my South Side.

Kelwin Harris is a public speaker, city planner and public engagement professional who focuses on creating equitable communities, empowering people that have been historically excluded from connectivity, and dismantling inequity in Chicago. View more posts